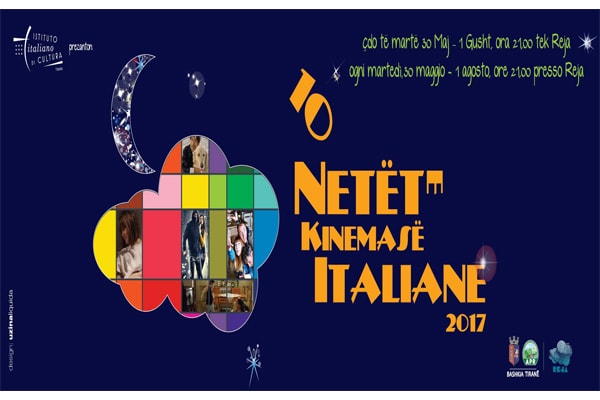 The Italian Cultural Institute, in collaboration with the Ministry of Foreign Affairs and International Cooperation and the Municipality of Tirana, will present the second edition of the summer film festival  “10 Nights of Italian Cinema”. The Italian Film Festival starts up  on May 30, 2017 and for ten consecutive Tuesday will be showed at the Reja installation,  Italian films in the original language with subtitles in Albanian. The initiative aims to create a meeting and entertainment opportunity for young people  who will stay in the city during the summer  and  to raise awareness and promote contemporary Italian cinematography almost completely absent throughout the year  in cinemas. The access  will be free of charge for anyone who wants to attend and spend pleasant evenings dedicated to  beautiful Italian cinema. There are many  films genres  for 2017 edition Italian Film Festival.   The Film Shedule: May 30, 2017 - If God wants, directed by Edoardo Falcone June 6, 2017 - White as ilk, red as blood, directed by Giorgio Campiotti June 13, 2017 – The called Jeeg Robot, directed by Gabriele Mainetti 20 June 2017 - Belli di papà, directed by Jude Church June 27, 2017 - The chair of happiness, directed by Carlo Marzzacurati July 4, 2017 - Sorry if I exist, directed by Riccardo Milani July 11, 2017 - No one will find me, directed by Egidio Eronico July 18, 2017 – Sweet dreams, directed by Marco Bellocchio July 25, 2017 – Cinema paradiso, directed by Giuseppe Tornatore August 1, 2017 - Italo, directed by Alessia Scarso

Place: Reja in front of the National Gallery