The history of the Toptani family

Tirana has always been linked with the famous Toptani family, once the biggest landowner of what is today the center of the capital. How did the family come to be the ‘owners’ of Tirana during the XVI century?

There are two versions about the origins of the name Toptani. One story links it to the Principate of the Thopias, the family of the husband of Mamica, sister of Skanderbeg. According to the French writer and diplomat Jules Alexandre Theodore Degrand, who was a consul in Shkodra in 1900, the legend tells of a child found by Turkish soldiers who entered Kruja and searched the house of Mamica, Skanderbeg’s sister, married to Tanush Muzake Thopia. The child, the legend goes, become later the head of the Toptani clan, whose members were all great fighters. Their house was like a museum. The walls were decorated with beautiful floral patterns around the windows. There were gold and silver objects on the walls, most of them expensive weapons. There were also beautiful traditional suits, and some trophies, which were the pride of the house. The Toptans were a very big and widely known family, Degrand said.

Degrand had heard of another story about Tirana: In the year 1600, a man named Sulejman Bargjini had built a Mosque, a bakery and some baths, all in a land which before was a forest with small poor shacks. That’s the place where an old mosque stands today.

However, Tirana is much older than that, if we refer to Marin Barleti, the 16th century author of the history of Skanderbeg. Barleti called the city Tyrana, and this is enough proof to reject claims that the city was named after Teheran, the capital of Iran.

Sulejman Bargjini was killed in Bagdad. It was his son Ahmed who finished the Mosque and built a water fountain. Later, Ahmed’s grandson built his house here. It was called the Big Tower and had strong walls and a round watch tower. When Ahmed Pasha died, he left four daughters in young age. Their relatives sought protection with Kapllan Pasha of Kruja, offering him to marry his sons to the four orphaned daughters of the Bargjini clan. Kapllan Pasha, the grand grandfather of Esad Toptani, accepted the offer, since the Bargjini daughters were wealthy and owned lands around Tirana. Kapllan’s sons moved to Tirana and all the family used Toptani as their last name. In Turkish Toptan means together. The legend has it that when the family moved to Tirana, Kapllan Pasha said: Now they are all together. Hence the name Toptan.

Young Esad was one of the heirs of the clan. As a kid, he could seat on top of the old walls surrounding the house which stood where Hotel Dajti is today and watch the endless grassy space below. There were no buildings as far the eye could see all the way down to where the University of Tirana stands today. Just a few trees and an occasional creek.

He went to Istanbul in 1891 and married a beautiful Turkish woman called Shadije Aziz. Esad was then 27 years old. He had divorced his first wife with whom he had three daughters: Nafije, Mahmude and Pertefe. Esad stayed only 3 weeks in Istanbul and came back to Tirana to manage his properties together with his new wife. According to his brother-in law, Fikret Aziz, Esad was rich. His yearly revenue from his lands amounted to 200 thousand francs, about 1 million in today’s dollars. The most lively part of the town was the bazaar which Esad restored with his own money. Many craft masters and artisans worked there during the day. When Esad visited the bazaar the craftsmen stopped working to salute him. 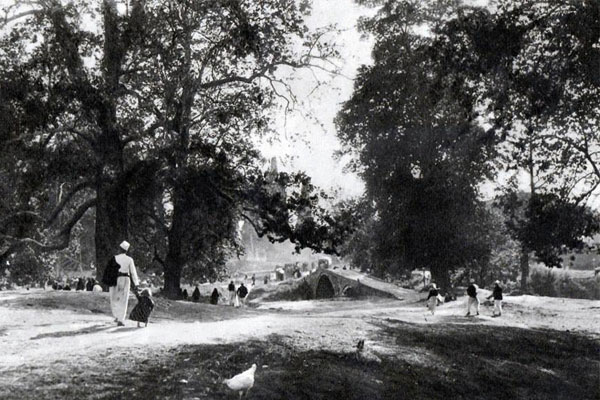 When the weather was fine the Toptani men and women would go out for picnics at Saint Prokopius, a hill in the outskirts, where they would lay carpets and pillows and share good food with each other. People would dance and sing for hours.

The strength of the clans was measured by the number of soldiers they were able to recruit for the Sultan. The Toptanis were able to raise a small army of 500 which helped it become richer and richer during the Ottoman Empire.

Today, a number of buildings a street in Tirana bear the name Toptani: The Toptani Trade Center, Pedestrian Street Toptani, the Selim Pashe Toptani house (1833-1840) and the Toptani Castle, which was restored and opened in 2018.