‘Euridita’ (Eurydice), the famous dramatic play by American writer Sarah Ruhl, is brought for the first time to the Albanian stage by director Jonida Beqo, Metropoli Theatre. The dramatic play was showed last night for journalists at Pyramid Building, while the premiere will be on 12th of October.

It tells the classic story of Orpheus's myth, through the eyes of his love, Euridita (in Greek mythology Eurydice). It is a very sad story, which takes you to the world of life after death. Euridita was so in love with Orpheus, and their love was sublime. Everything was perfect and they decided to get married, but suddenly she dies in her wedding day, falling from a high platform. It was so tragic and Orpheus broke in tears.

Euridita travelled to the underworld, where she met her dead father. She was so lost, and didn’t remember anything. Her father helped his lovely daughter to understand what happened to her, to remember her childhood and mostly her love with Orpheus, taught her to read his letters which he sent from the living world.

The play is randomly shifting from the dead world to the living world. Orpheus was a well-known musician, he sing and plays different instruments. When his lover was alive, he sung only joyful songs, but after her death he played the most sad music making everyone cry. 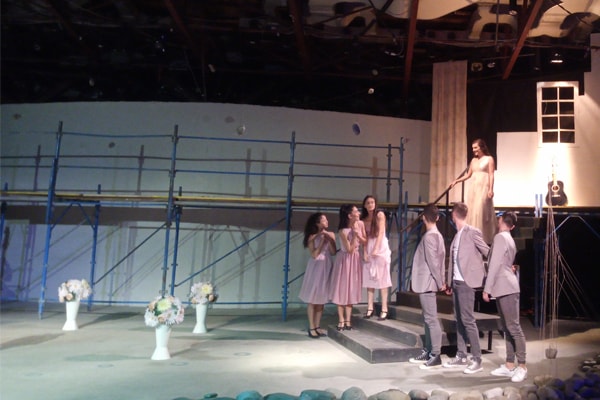 Orpheus can’t live any longer without his wife, so he decided to go down to dead world to retrieve his love. Euridita had a chance to return to earth and to live with Orpheus, but she chose to stay in the underworld with her father. It looks a never ending love-story, but at the end, when Orpheus comes to underworld, Euridita lost her memory and she married to the Son of Mrs.Death. The tragedy was that even in the dead world, Orpheus remained alone without his lovely wife. 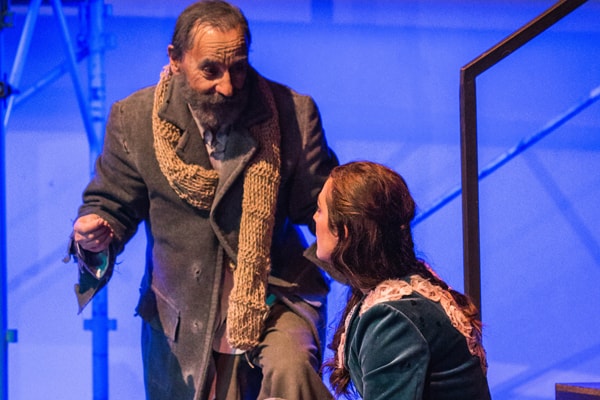 The music is played  in the background during the entire show, sometimes joyful and sometimes sad melodies. The talented actor Amri Hasanlliu, who play Orpheus, who is also a solo artist, played 4 instruments during the show.  Euridita is played by the young actor Armela Demaj, while this show brings to the stage one of the well-known actors Niko Kanxheri, who plays the role of the Euridita’s father. The Director Jonida Beqo is also part of the cast, and she plays the role of Mrs.Death.

‘Euridita’ opens the new season for Metropoli Theater. The Director of Metropol Theatre Jonida Beqo says that they decided to bring the first play of the season into the stage of the famous building of Pyramid, in order to put in use some other public spaces, rather than only the theatre scene. Pyramid, which is a ‘symbol of grave’, is probably best choice as it fits perfectly for  the scenography of  this play where the main subject is ‘death”.